It's time for another competition!

We're giving away one of our brand new t-shirts - All you have to do is email us a picture of you and your favourite item of retro kit! You could probably do better than me with my Nintendo Gamecube... Email your picture and T-Shirt size to: This email address is being protected from spambots. You need JavaScript enabled to view it.

We'll announce the winner on Friday 8th February 2013 and post the best pictures on the site.

Lyrically this one was inspired by Paul's reluctance to turn thirty, on the run up to this milestone he wrote an autobiographical play of the same title.

It sounded a little bit country and so we decided that we'd take it the rest of the way and make it a full-on country song by enrolling the skills of David Greeves and his Pedal Steel guitar. 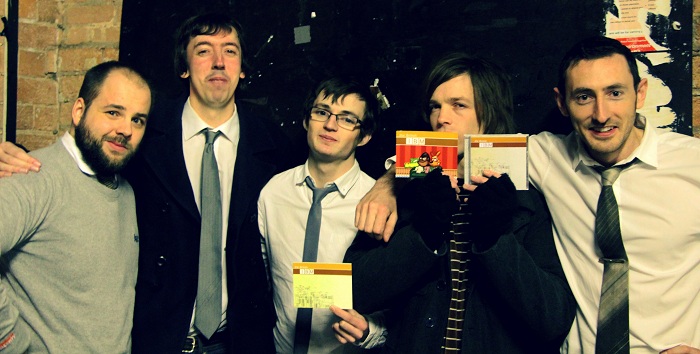 Well we've just played our first gig of 2013! The three of us braved the snow and headed to Derby where we played the Victoria Inn alongside Sam Forrest (Nine Black Alps) and Charm of Achilles. Even our manager Matt came out for this one, it was an excellent night involving a few too many beers and some great music. Next stop is going to be the legendary Dublin Castle in Camden on the 31st Jan 2013.

5. Space Quest (PC)
I spent many happy hours playing through Sierra and LucasArts adventure games when I was a kid and since then I’ve periodically utilised my time off to re-complete some of the classic titles. This year it was Space Quest 1 to 4 that made it onto my “retro laptop” and I completed all four over Christmas. It was mainly due to the Guys From Andromeda getting back together and promising a brand new space adventure that made me want to take control of hapless janitor Roger Wilco once again and save the universe from the wrath of Sludge Vohaul. If you’ve never played Space Quest, start with the originals, the VGA remakes are no where near as good!

4. Indy 500 (Atari 2600)
Played this for the first time ever at Play Expo 2012 and I now defy anyone to have a two player game after a couple of beers and not completely fall in love with this game. Utilizing the Atari driving paddles this really is a racing game that’s been stripped down to the very basics with no complications, no turbo boosters, no gears, no fancy 3D graphics just 100% zen like gameplay. I actually went on eBay as soon as I got home from the Expo and purchased myself an original Atari 2600 just for this.

We decided to mark the end of 2012 with a couple of Top 5's for our most played video games of the year with myself covering the modern day stuff and then Aidy's gonna be jumping in with his top 5 retro picks. So, here's my top five "new" games of 2012!

5. Super Hexagon
I played an extraordinary amount of Super Hexagon this year. Turns out a game where you move a little triangle in a circle proved to be one of the my most challenging experiences of last year. Chipzel's soundtrack is also totally amazing.

4. Lone Survivor
I'm a massive fan of horror games but it seems that the creators of creepy games like Resident Evil have ditched atmosphere in favour of pumping round after round of ammo into men with wings. Thanks heavens then for one man from Cambridge with a computer, who managed to create an even more unsettling experience than the 600 odd people who worked on the latest Resident Evil game.

3. Far Cry 3
I felt I had to force myself to finish Far Cry 2. Some cool systems wrapped in some tedious gameplay made for a lacking experience. Its sequel ramped things up to be bigger and crazier! They also hammered out a lot of the issues. Plus you couldn't punch a shark in the last game.